Machinal science is over all others of great usefulness, as by it all moving bodies perform their operations.(Leonardo da Vinci) 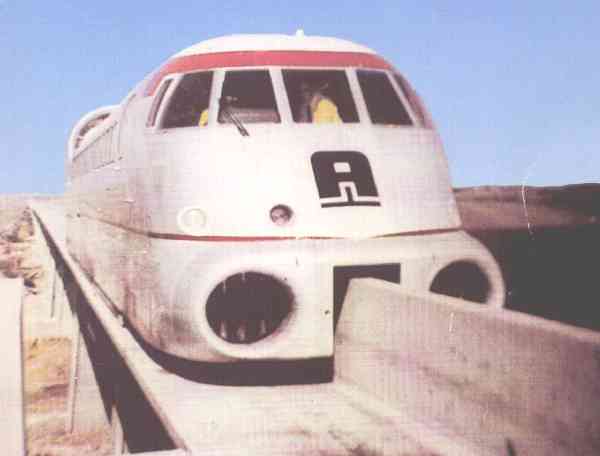 The air pad, or air bearing cushion, is an industrial equipment that was invented in France by Jean Bertin more than 30 years ago.
It is based on a simple and clean idea, that brought in the UK, in the same period, to the construction of the Hovercraft: to let objects float (or levitate) on a flow of pressurized air.
It was initially used for high speed trains: the record was reached at 430 km/h in 1974 with a vehicle for 80 passengers (see photo).
The technique was successively abandoned, with no evident reasons: if one considers the huge research investments that are spent in the magnetic suspension with superconducting magnets cooled in liquid helium, with the main goal of avoiding the contact with the rail, result that is readily available with air pads...

The technique was successively developed for handling loads in industrial units.
Today a complete set of equipment is available: both very special, and quite common handlings may be done, in a very natural and safe way.

The main feature of the air pad technique is in the virtually complete suppression of the friction with the soil: huge loads may be moved with ease (there are examples of ships with thousands of tons), but also more common loads in industrial shops, such as

for pallet jack applications or for unloading systems from machines. The floor should be of good quality,
however many industrial floors are suitable. A compressed air supply is required: air supply normally available in shops is generally sufficient.

Many different applications of air pad equipment are installed everywhere in Europe and in the USA: please ask even for cases you wouldn't believe as feasible!